Earlier this spring — maybe like around March or so — our friends Matt Harkins and Viviana Olen reached out to us to see if we’d be interested in making something for their upcoming pop-up museum. Or micro museum. But really it’s like their fantastic, amazing, FABULOUS museum series.

These two brilliants have been curating tiny museums all over Brooklyn since 2015. It all started in their apartment hallway with what’s now the THNK1994 Museum’s permanent exhibit. This exhibit is dedicated to the Tony Harding and Nancy Kerrigan 1994 Olympic fiasco (ok, if you don’t know what I’m talking about right now 1. clearly you’re too young to be on the internet, and 2. at LEAST Google it and visit THNK 1994’s website #millenials).

They received so much support and praise for THNK1994, that by the powers of positive reinforcement, they curated a second museum. This one dedicated to The Olsen Twins Hiding From The Paparazzi.

And because Rolling Stone liked their Olsen Twins exhibit so much, they were encouraged to do their third and most recent museum dedicated to this 40-second clip of Kim Cattrall scatting while her then-husband plays the upright bass. They called it Yama Kippi Yay Bo (for obvious reasons). And, everyone, that is where Tiny Stitchers comes in!!

In honor of Kim Cattrall scatting, we decided to knit an life-sized upright bass down to the scroll and strings. We used SO MUCH brown yarn. 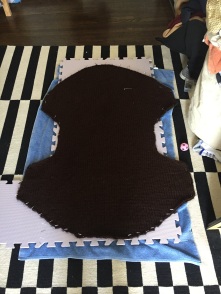 Making this bass was so much fun, but getting to be a part of this quirky and funny exhibit was really incredible. Matt & Viviana have so many fans, so it was fun to see our work be along for the ride when folks like MTV, and Broadly highlighted this most recent show.

The Yama Kippi Yay Bo exhibit closed in May, but we were able to get a bit of the inside scoop on how things went and what’s coming up next. Keep reading below!

Tiny Stitchers: How do you think Yama Kippi Yay Bo compared to past museums?
Matt & Viviana: This was definitely the most specific exhibit we’ve put together. There are a lot of people (above a certain age) who remember Tonya Harding, Nancy Kerrigan, and the 1994 Olympics, and the same goes for the Olsen Twins, but it’s a very specific group of people who are as passionate about this YouTube video. There were also a lot of people who came just because they love Kim Cattrall in general and honestly, who doesn’t?
TS: What do you think is the biggest thing you’ve learned about organizing and putting together pop-up museums?
M&V: If you put in the time and work necessary to make something that expresses your passion for someone or something and it’s a genuine passion, then people will come.
TS: It seems like you all received more media attention for this museum, how do you go about spreading the word for your museums? Is it getting easier as you’ve curated more museums?
M&V: We’ve worked with a publicist in the past but for this one, we tried to reach out to as many people as possible who were as passionate about this YouTube video as we were.
TS: I know you can’t have favorites, but what was maybe the most…viewed or gawked at peace in the museum this time? (Besides our knit bass, duh.)
M&V: We made everyone sit in a chair and stare at a wall of Kim Cattrall paintings, while we took a photo of the back of their head because the exhibit, like life, is about Kim not about you. So whether they wanted to or not, that wall was what people viewed the most.
TS: What are you all doing next?! (And we’d love to be involved again!)
M&V: Our next exhibit will be opening towards the end of July and will be a collaboration with @popculturediedin2009. Come celebrate the aughts in the dead of summer with us!
Check out www.thnk1994.com to see more pictures of Yama Kippi Yay Bo and their other museums and for details on their upcoming collaboration!